So… The democrat youth of Egypt, egged on by the Islamic Brotherhood, rioted for 18 days and demanded the autocratic rule of President Hosni Mubarak end, that he step down and a civilian style government be installed. Mubarak finally did step down and the military is in charge. The cabinet, parliament and congress are now also kicked out and the constitution is suspended as the revolutionary rioters demanded.

Among other things, It seems that the people had no freedom to address their grievances against the government which we in America are promised in the First Amendment of our U.S. Constitution. They have been unable to speak out against an oppressive regime which would crush resistance and punish those who disagreed with official policy. Many protesters were beaten by police in the beginning of the revolution, but many of the police later stripped off their uniforms and joined the rioters. (Would you want to be a policeman in Egypt  for $85 – $100 per month?)

President Obama told President Mubarak that he should step down.

Women swooned at his words

I see parallels between Egypt and the U.S. when I look at our current situation in America. We have an oppressive ruler over a regime  which crushes any opposition. Businesses and banks have been seized, Free Enterprise has been declared “the enemy”. He doesn’t use the police and the military force, instead he uses his dogs in the media to assassinate his enemies, just like he learned in the book,“Rules For Radicals” by Neo-Marxist and Satanist, Saul Alinsky. (A man every leader should emulate?)

America was not set up this way. The leaders were meant to be servants of the people. The people are meant to be citizens, not subjects of the throne.

We fought a revolution before to make sure of that.

At the beginning of this country, there was heavy taxation without representation. Today, we have the same thing… heavy and ever increasing taxation by an arrogant ruler who’s only desire is a Marxist state of equal poverty for all but a handful of elites.

If enough American Citizens get angry enough and riot in the streets of D.C. demanding that the arrogant ruler step down, do you think Obama would step down? Instead of suspending the Constitution, could we re-institute the Constitution Obama and his minions have tried to undermine from day one? Would the Police and the Military join with the citizens in revolt since the regime’s actions effect them as well?

Of course, I would never advocate such a thing… but is something to think about. 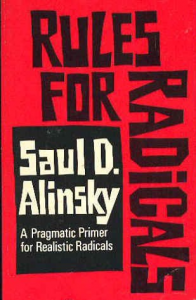 Many people know by now that Alinsky had a dedication to Lucifer on the earlier copies of his book Rules for Radicals that went as such:

“Lest we forget at least an over-the-shoulder acknowledgment to the very first radical: from all our legends, mythology, and history (and who is to know where mythology leaves off and history begins — or which is which), the first radical known to man who rebelled against the establishment and did it so effectively that he at least won his  own kingdom — Lucifer”

“Obama learned his lesson well. I am proud to see that my father’s model for organizing is being applied successfully beyond local community organizing to affect the Democratic campaign in 2008. It is a fine tribute to Saul Alinsky as we approach his 100th birthday.” — Letter from L. DAVID ALINSKY, son of Neo-Marxist Saul Alinsky

PS:
Obama helped fund ‘Alinsky Academy’: “The Woods Fund, a nonprofit on which Obama served as paid director from 1999 to December 2002, provided startup funding and later capital to the Midwest Academy…. Obama sat on the Woods Fund board alongside William Ayers, founder of the Weathermen Underground domestic terrorist organization….  ‘Midwest describes itself as ‘one of the nation’s oldest and best-known schools for community organizations, citizen organizations and individuals committed to progressive social change.’… Midwest teaches Alinsky tactics of community organizing.”

Take it for what it’s worth. If you doubt anything I have written here, hit your Google and check it out.