There are lots of conspiracy theories out there concerning a wide variety of subjects, including the truth about September 11, 2001.

Every president throughout America’s history who has been considered a “Great President” has been a president during a time of war.

My theory involves the Clinton Regime and a quest for “Greatness” in the history books.

When someone mentions the name, Bill Clinton, the first image that pops into most people’s heads is an overweight brunette intern and a cigar. I do not condone or endorse such things, but it is a matter of fact for a great number of men in powerful positions. I’m not attacking or defending, just stating fact. (To all the haters and defenders out there, Clinton was not impeached for getting some “relief”, he was impeached for telling lies under oath to the grand jury.) 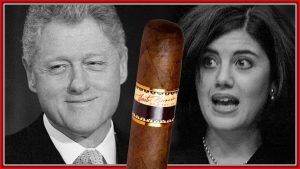 Clinton will go down in history for his conduct and actions concerning the war efforts in the Baltic states. Wouldn’t it increase Clinton’s legacy if his vice president were to also go down in history as a great wartime leader? That is the possible link to the 9-11 conspiracy.

Twice, during the Clinton/Gore administration, Uganda offered Osama Bin Laden to Bill Clinton for prosecution. Both times Clinton responded in the negative. Naw, just let him go (but tell him to give me a call).The world’s leading terrorist, offered up on a silver platter, and released with Clinton’s blessings, a tool to be used later. 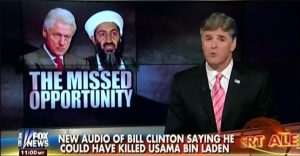 In the several months leading up to the 2000 election, The Clintons (both) along with many democrats were in front of the cameras on a regular basis, talking about the Weapons of Mass Destruction held by Saddam Hussein and the need to put an end to his tyrannical rule. “We know he has them,(WMDs) and we know where they are” America KNEW Saddam had these chemical weapons because America gave them to him for his war against Iran. The American public became more aware of this when video was released showing the use of these chemical weapons against Saddam’s own people. He gassed entire towns and had video made showing the images of people and animals quivering and convulsing as they died horrible and painful deaths. The Clintons pointed to this as proof positive that WMD’s were in the hands of a mad man. They were building up justification for a war which would be lead by Albert Gore Jr. Once they were able to get him elected, he would become a great president and extend the legacy of Bill Clinton as his mentor. To put the lock in, the Clinton/Gore administration made it official American policy to remove Sadam Hussein from power and effect regime change in Iraq.

A trigger was needed to make the whole plan come to fruition and a previously released tool would come in handy. “Don’t tell me a thing, I want plausable deniability”. (like most conspiracy theorists, I have no proof of any such conversations, so please bear with me here.) Plans were made for a “triggering event” which should take place after the election and crowning of Prince Albert. Left to his own devices, Osama Bin Laden went to work on a massive plan. Then, something went wrong.

At the end of the 2000 elections, the winner was George W. Bush and Al Gore conceded the victory to him. Clinton quickly dashed to Gore’s side and snatched him into a back room for a quick conference. (You’re messing with my legacy, dammit!) 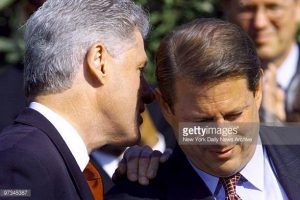 When they emerged, Al had changed his tune and was demanding a recount of the votes in parts of Florida where they just KNEW they had bought more votes than that. Senile seniors who were bussed to the polling places were told to poke the second name down in the ballot card. Although Al Gore was the second name on the list, the hole that represented Gore was the third hole down. All those scared, blind, senile seniors that were shoved into voting booths by their democrat handlers cast their votes for Patrick Buchanan. (Oops! That’s what you get for trying to cheat!) 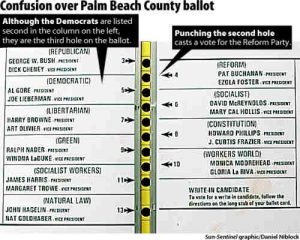 They recounted, and recounted and recounted, but each time, the numbers got even stronger for Bush. They kept trying to recount in just certain counties, but by Florida election laws, the entire state must be recounted. Then the Gore people tried to sue disallow all the votes mailed in by military members overseas, knowing full well that military tends to be predominantly Republican voters. Finally the Supreme Court told Florida that what they were doing was illegal and must cease. To this day, there are still democrats who cry that Bush was given the election by the Republican controlled Supreme Court, ignoring that there were more democrat appointees than Republican appointees on the bench. They continue to say that Bush was “Selected, not elected”. Check the facts… The Supreme Court didn’t declare George Bush president, they just told Florida that what they were doing was illegal and had to stop.

Sorry… I went off into a different rant there for a moment.

So, Al Gore is not moving into the White House, but that doesn’t mean a thing to Bin Laden. He is already looking forward to impaling the “Great Satan” and nothing will stop him. He and his fanatical devotees and fellow Jhihadists have several months to plant the explosives and primachord in the World Trade Towers (Yes, you just need to take a close look at the videos to see that there was definitely a controlled implosion). On September 11, 2001, the weight of a new war was placed squarely on the shoulders of President George Walker Bush, not on Albert Gore Jr. Bush was now going to be the war president with all the glory and the enhanced legacy. That would just not do! Anyone who has been around for an election or two can tell you that democrats are very poor losers.

Once Bin Laden started bragging on video about the great strike against evil America, the troops were sent into Afghanistan to get him. Bin Laden crossed into Pakistan, but Pakistan would not give America permission to bring the war into their country. Hey, as long as we are in the neighborhood and the Clinton/Gore administration made it official American Policy to take Saddam out of power and effect regime change, why don’t we just step over here to Iraq and accomplish that little mission? It took a bit longer than Desert Storm, but they took Saddam Hussein out of power. 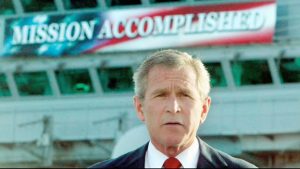 The mission was to take Saddam out of power

Searching around the country, the troops found a lot of weapons and bad guys, but they never found huge warehouses filled with crates marked “WMD“. This gave the democrats the chance to yell about Bush attacking Iraq for oil. Suddenly all the democrats, with the Clintons in the lead, were yelling about there being no evidence of WMDs even though the year before, they knew they were there and they knew where they were hidden. Satellite imaging showed convoys leaving Iraq and going into Jordan and Syria, but that didn’t mean anything to those opposed to Bush. They had an 8 year long “Hate Bush” campaign and you know that when you hear a lie often enough you start to believe it. So many liberals now believe that Bush is the son of Satan and is responsible for everything that has gone wrong in America since 1776. They even swear that he is responsible for all the evil and harm Barak Obama has done to America over the past two years.

Sorry, *I started to go into another different rant again. 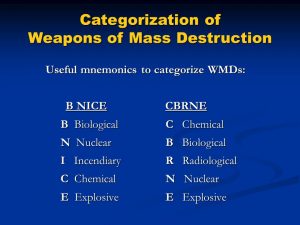 So, the condensed version… The events of 9-11 were set up by the Clinton/Gore administration to enhance Bill Clinton and Al Gore’s legacies. Failing to steal the election in 2000 lead to everything being Bush’s fault from 2000 to the present and throughout the Obama rule, maybe even longer than that.

As for the WMD’s? Wikileaks has revealed a few things about them:

Wikileaks: WMD program existed in Iraq prior to US invasion
December 7th

The release by Julian Assange’s web site Wikileaks of classified documents reveals that U.S. military intelligence discovered chemical weapons labs, encountered insurgents who were specialists in the creation of toxins, and uncovered weapons of mass destruction in Iraq. However, Washington, DC officials and the news media have ignored this information.

One of the WikiLeaks document dumps reveals that as late as 2008, American troops continued to find WMDs in the region.

There are numerous mentions of chemical and biological weapons in the WikiLeaks documents, however the U.S. media appear only interested in those portions of the leaked material that highlight actions that are viewed as embarrassing for the U.S. military such as the accusation that U.S. commanders were aware of abuse and “torture” of prisoners by Iraqi soldiers and police officers.

The U.S. Defense Department continues to demand that WikiLeaks
founder Julian Assange immediately return the stolen military documents in his possession, including recent documents that created another stir when published, according to Elaine Wilson of American Forces Press Service.

The department also wants the whistle-blowing web site to permanently delete all versions of these documents, which contain classified and sensitive information, from its web site, computers and records, Pentagon Press Secretary Geoff Morrell told reporters during a Pentagon briefing.

WikiLeaks documents don’t reveal evidence of a massive
weapons program by Saddam Hussein — the Bush administration’s leading rationale for invading Iraq — or some enormous stockpile of WMD, but do reveal that chemical weapons did vanish from the Iraqi battlefield.

According to the latest WikiLeaks document “dump,” Saddam’s toxic arsenal, significantly reduced after the Gulf War, remained intact. Jihadists, insurgents and foreign (possibly Iranian) agitators turned to these stockpiles during the Iraq conflict and may have brewed up their own deadly agents, according to the WikiLeaks web site.

During that time, former Iraqi General Georges Sada, Saddam’s
top commander, detailed the transfers of Iraq’s WMD. “There [were] weapons of mass destruction gone out from Iraq to Syria, and they must be found and returned to safe hands,” Mr. Sada said. “I am confident they were taken over.” 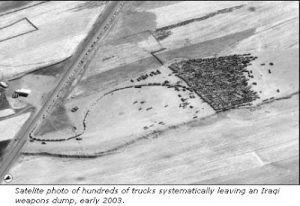 in 2004, for example, American special forces members secretly
purchased what they believed to be containers of liquid sulfur mustard which have been used since World War I. Following testing in a military lab, the chemical was then secured and transferred to a secret location. 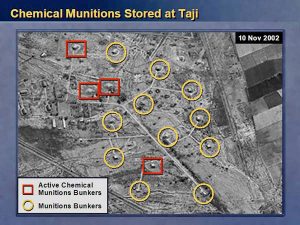 “One of the bunkers has been tampered with,” they write. “The integrity of the seal [around the complex] appears intact, but it seems someone is interested in trying to get into the bunkers.” 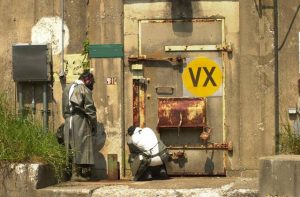 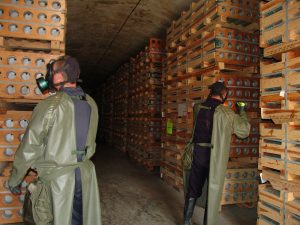 During the a battle in Fallujah, American forces claim
they discovered a “house with a chemical lab … substances found are similar to ones (in lesser quantities located a previous chemical lab.” The following day, there was a call in another part of the Fallujah requesting “explosives experts to dispose of a chemical[weapons] cache.”

In addition, an armored vehicle came upon “155mm rounds filled with an unknown liquid, and several of which are leaking a black tar-like substance.” Initial tests were inconclusive. But later, “the rounds tested positive for mustard.” 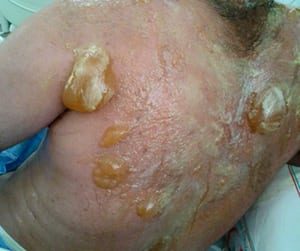 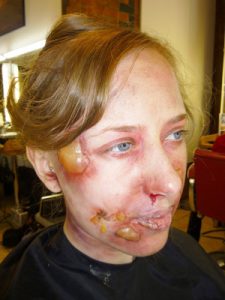 The effects of Mustard gas